Byodo-in was originally built in 998 in the late Heian era as a villa for Fujiwara no Michizane, one of the most powerful members and authority among the Fujiwara clan; it was then converted into a Buddhist temple in 1052.
In the late Heian era in Japan, people believed in the idea of 'Mappou Shisou' - i.e. that after the death of Buddha, Buddhism would die out and people would be hit by natural or human-made disasters and the world would fall into disorder.
The construction of Byodo-in temple was influenced by those ideas and those of the Amitabha Tathagata, who is revered as a savior from heaven.
Around the temple we can find the remains of a garden representing the landscape of heaven. 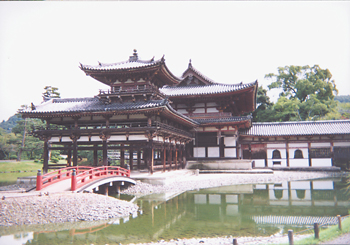